68% of our teaching faculty have advanced degrees, and an average of 11 years of teaching experience. 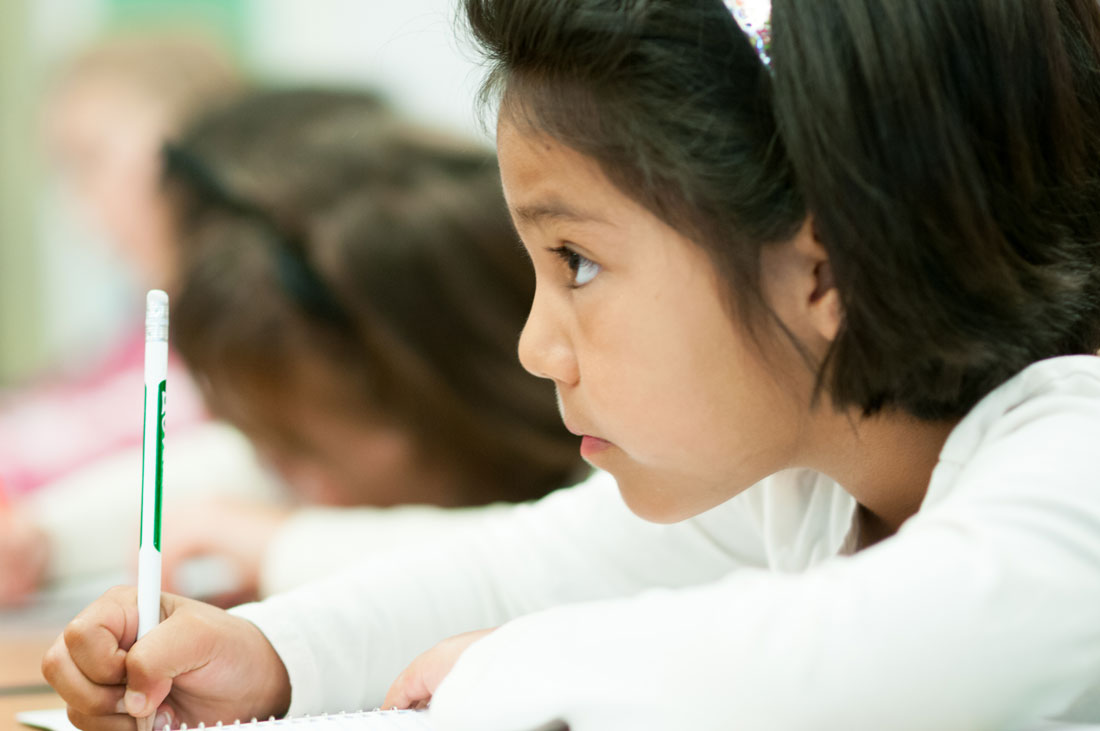 Our bilingual education model is progressive, starting with intense immersion in the early years, a 50/50 instructional model in grades 3,4, and 5, and ending with a solid emphasis on English and focused, high-level target language in middle school. In Grades 3-5, we implemented language specific block schedules to incorporate best practices and improve the quality of learning.

In Kinder 1 (K1) and Kinder 2 (K2), learning is almost entirely in the target language with the exception of three lessons each week in English (approximately 2 hours total) that include instruction for language arts, fine arts, and music.

In Kinder 3 (K3), ISDenver incorporates additional time in English to build the foundation for writing and reading in English, as well as in the target language. Linguistic research indicates that for bilingual education to succeed, both languages must have the same status for children, even if English is used less in the classroom. By incorporating both languages in the classroom, students view them with equal status – they are equally viewed as “languages of school.”

Children acquire bilingual skills through activities and play that set the foundation for future learning processes. Because the best time to acquire an additional language is between the ages of three and six, language acquisition is very natural at the K1-K3 stage. All subjects – math, science, art, English, history, music, physical education and social studies – are studied at age-appropriate levels in the target language, starting as early as 3 years old in this first cycle. Students are not simply learning French, Chinese, or Spanish, but rather, they are learning all traditional school subjects in and through French, Chinese, or Spanish.

In Grades 1 and 2, learners spend 70-80% of the school week solidifying their knowledge-base in the target language. Students also begin transferring their target language literacy skills and knowledge to the English language. Time spent learning in and through English increases to foster a heightened focus on English language and literacy skills, music, art, and science-based global projects (iSTEAM). All subjects, including math and science, continue to be studied in the target language of French, Chinese, or Spanish.

In Grades 3, 4 and 5, learners expand their study of both the target language and English. Students become truly bilingual at this stage, and may also be introduced to a third language that can be studied in an optional, after-school program in Grades 3, 4, and 5, with the option to continue that language of instruction in the Middle Years Programme (Grades 6, 7, and 8). Instruction in English accounts for approximately half of the time spent in class. The learning of science, social studies, and math in English complements and augments the instruction of these subjects in the target language.

ISDenver’s Middle School is an authorized International Baccalaureate (IB) School implementing the Middle Years Programme (MYP) in grades 6, 7, and 8. During this cycle, MYP learners continue to develop the academic, technological, social emotional, and ethical skills that prepare them to succeed in high school, college, and beyond. A strong set of values is consistently woven throughout the middle school academics, building critical thinkers and responsible global citizens.

Following the IB Middle Years Programme model, learners now study in more structured periods: approximately 28 periods per week are taught in English, with the remaining 7-10 periods dedicated to language acquisition in French, Spanish, or Chinese. ISDenver is the only middle school – public or private – in the Denver region offering the International Baccalaureate Middle Years Programme with this level of language acquisition instruction. At ISDenver, language is not taught as a “second” language only a few periods a week, but rather through immersion, accounting for 20-30% of the school week.

There are two tracks for language acquisition instruction in MYP – the Novice Track, for new language learners or those who want to continue with their 3rd language in MYP, and the Advanced Track for students continuing in their target language from our elementary immersion program. All language instruction continues to be taught by native speakers.